That’s outrageous! Why fluoride in water is a scheme

Emily was in elementary school, at 8 she was just starting to feel peer pressure to fit in. Joanna could faintly remember how odd she felt at that age.

She learned that Emily was feeling self-conscious about her teeth.

They had developed white marks and discoloration. Joanna later learnt that Emily was suffering from fluorosis.

So, there is something going on, she thought to herself. All this talk about fluoridated water might be a real problem. One more thing to worry about…

Infamous among young families, the benefits of fluoride in water are disputed among mounting concerns for the health effects in small children.

These fluoride compounds, however, might not be pharmaceutical grade fluoride but basic compounds such as sodium fluoride, silicofluoride or hydrofluorosilicic acid instead.

According to the National Cancer Institute, it all started in Grand Rapids, MI, in 1945, the first city to implement city-wide water fluoridation. Sodium fluoride was initially used coming primarily from by-products of the aluminum smelting industry, their top supplier at the time. 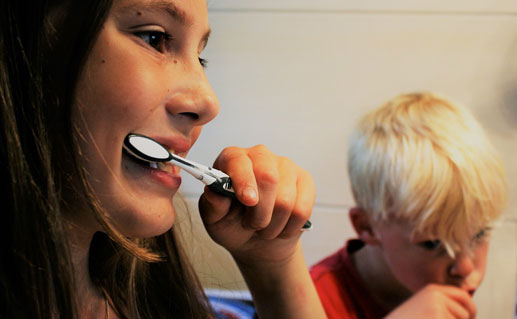 One of the concerns about fluoride becoming toxic is its presence in our everyday lives in such high concentrations. Everything for oral care and hygiene contains fluoride. How much is too much?

The public never had an opportunity to consent to this, they had no idea they were drinking fluoridate water. Nonetheless, the decrease in dental cavities here was a catalyst for other cities in the US to fluoridate their water.

To make matters even worse, fluoride is an industrial waste from the manufacturing of iron, steel, agricultural fertilizers, cement, glass, ceramics and other products.

Fluoride, in the form of a by-product of fluosilicic acid, is dumped into waterways as the processing plants go about their business, even though regulations try to control this. So, a smart way for these industries to handle this is packaging it so they can sell it to municipalities to add it to tap water and prevent tooth decay(!)

Because fluoride is not a water treatment method, but a chemical added for dental health, public outrage is acute because of the lack of informed consumer consent and education about the effects of the current levels of exposure.

Another important thing to have in mind is that currently we don’t know how fluoride interacts with other chemicals present in our water. For example, we now know the effects of chlorine by-products and how harmful they are, see here.

EPA standard is currently 4 ppm (parts per million). However, adverse health effects can start with levels of only 1 ppm. 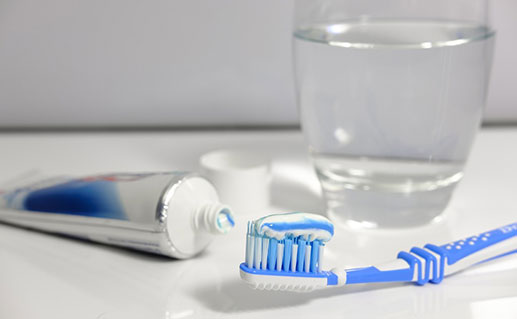 Excessive amounts of anything in the human body gets excreted and/or re-absorbed. What is the impact of excess fluoride?

As extensively discussed in an NBC News article, the issue with the recent movement against fluoride in water is the debate about whether fluoride added to tap water lowers IQ and causes several long-term diseases such as Alzheimer’s.

However, skeletal fluorosis is a real disease brought about by excessive amounts of fluoride, which produces stiffness of joints and bones, plus abdominal pain and nausea.

Other common side effects of excessive fluoride is fluorosis of the teeth, which shows up as minor staining. That’s what Emily had.

Some health hazards associated to fluoride are:

Another way to think about this issue is to realize that toothpaste and mouth-wash have increased their levels of fluoride too.

So, at the end of the day we are consuming way too much fluoride and this excess in the long-term might be harmful to our health. 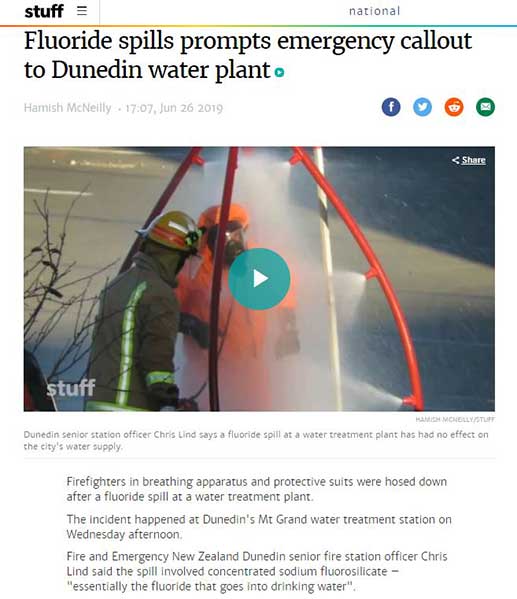 Firefighters were hosed down after a fluoride spill at a water treatment plant in New Zealand. (Stuff, June 26. 2019)

Do your own research about fluoride in water

According to the Harvard School of Public Health, even though fluoride has its benefits for dental protection, further research is necessary to understand the safe amount of dosage in public water systems, study the risk of adverse health effects and take into account the effects on highly vulnerable populations (like bottle-fed infants and dialysis patients).

Removing fluoride from water is no easy feat, it requires high-tech filtering materials and slow flow rates to increase adsorption.

The best way to remove fluoride is with an activated alumina filter (AAL) that requires sufficient time in contact with the filter in order to effectively remove this toxic element.

Just like Joanna, you are right to be worried about fluoridation. It’s better to be safe than sorry, get a carbon water filter and have peace of mind.

You can also learn about the dangers posed by pharmaceuticals in water, a growing challenge in our water supply, a challenge our treatment plants are not ready to solve.

Get monthly info about water and stay up to date with the latest about this essential resource by subscribing to my newsletter, below, it’s free!

Environmental Protection Agency (EPA), Citizens petition in re: Use of hydrofluosilicic acid in drinking water, www.epa.gov

NBC News, Science says fluoride water is good for kids, so why are these towns banning it? www.nbcnews.com